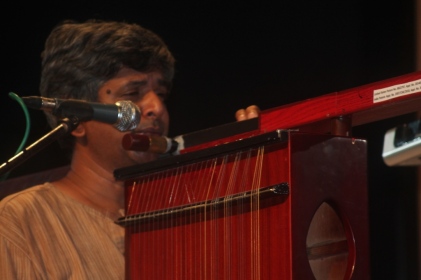 Uday Shankar, born in 1962, grew up in Chennai and was first introduced to Carnatic music as a young boy by his father, who taught him a few ragas and encouraged him to try them out on a flute. His uncle took him to the concerts of masters like Semmangudi, M D Ramanathan, K V Narayanaswamy, the Violin Trio with Palghat Mani Iyer and others at Shastri Hall, Tyagaraja Vidwat Samajam and RR Sabha. He developed a lasting obsession with the world of sound, much more than even the music — experimenting with a bamboo flute and later on, with veenas, tamburas, and any other instruments he could lay his hands on. He developed an interest in the physics of sound and the dynamics of playing music on different kinds of instruments, albeit with no formal training on any of them. Concurrently, he was also drawn to other genres of music, including Western Classical and Rock.

During post-college years he received a few formal lessons on the Carnatic flute from Vidvan Shri T S Sankaran, a disciple of Mali. He also interacted with Chitravina Narasimhan who gave him lessons on Raga and Tala basics. Profoundly influenced by the continuous, resonant, singing tone of the chitravina and its prime exponent maestro Ravikiran, he learned a few songs on the instrument during the latter’s visits to Atlanta during 2001 and 2002. Consequently emerged a desire to play a flute with the continuity and playing dynamics of the chitravina, ideally suited to Indian music.

During 2008-09 Uday started fabricating initial prototypes of the wind instrument portion, newly-christened as Chitravenu, and discovering the technical challenges of devising such an instrument. Challenges of the flatness of the main pipe and sliding member, their smoothness, stickiness and friction, mouthpiece design, the physics of tone, mitre-joints and so on needed constant research, experimentation, and his own inventiveness in the absence of “experts” on this untraveled path. A working prototype finally emerged around 2010-11, and excellent suggestions and feedback from Ravikiran on the playing dynamics and range of the instrument led to further design improvements.

In Feb. 2014, the string section was added and the Chitravenu was a distinguished finalist at the 2014 Margaret Guthman Musical Instrument Design Competition conducted annually by the Georgia Institute of Technology in Atlanta, GA, USA.

An iterative process of technical improvement and practice playing a slide instrument with limited visual and no tactile feedback, coupled with plucked strings with only tactile feedback, has resulted in the present version. The last few years of Chitravenu development have thus been a full time avocation, working at the intersection of music, physics, engineering and the machine-shop floor.

A Biomedical Design Engineer by profession, Uday divides his time between Pittsburgh, PA and Chennai where he lives with his wife Radhika and their eleven-year old daughter, who also enjoys “playing” with a variety of instruments.